Suarez to Stay at Liverpool; Bring Title to Anfield 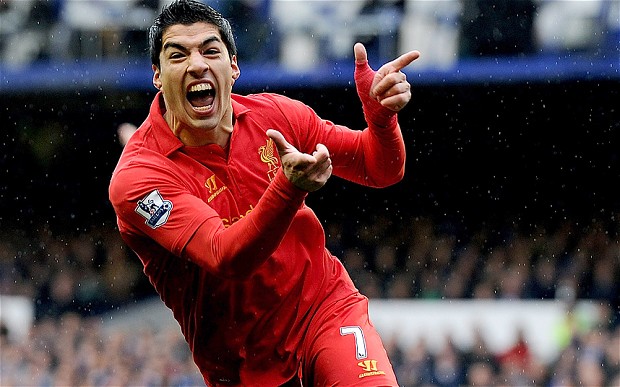 The Telegraph: Just a week after accusing Liverpool manager Brendan Rodgers of going back on promises made to him last summer, in an exclusive interview with The Daily Telegraph, Suarez has seemingly brought an end to one of the summer’s longest running transfer sagas.

Uruguayan journalist Martin Charquero reported this morning: “Luis Suarez has confirmed to me that he will not be leaving Liverpool. The support of the fans in the last few weeks has influenced his decision.”

Well well well, look what we have here. After all of the drama and turmoil that was the Luis Suarez transfer saga, it looks as though he is starting next season where he left off; on the Liverpool bench, riding out a suspension for being a maniac. But after the remaining 6 match ban, it’s trophy time, or at least get into the Champions League time. In order for Liverpool to avoid another dose of the Luis Suarez Summer Circus next year, they’re going to have to finish in the top 4 this season, and in my humble, unbiased opinion, I think they’ll do this with ease.

As for Arsenal, who is left for them to get their hands on? Piers Morgan is gonna throw a twitter TANTRUM if they don’t make a signing in the next few weeks. Who’s it gonna be? Edin Dzeko? Wayne Rooney (loling)? Stephan Lichtsteiner? Luiz Gustavo? Michu??? Either way you cut it, Arsenal missed out on a major signing with Suarez. Don’t get me wrong, Dzeko would be a solid signing too, but he ain’t Luis Suarez, and also I just don’t see it happening. It’s starting to look like another Transfer Season has come and gone, and Arsenal is still sitting atop their pile of Gold, cautiously waiting and watching everyone’s move. If they fail to acquire any impact players between now and the end of the transfer window, and also fail to acquire any silverware this season (inevitable), it might spell the end for BMCadwell’s main man Arsène Wenger.