The Guardian: Liverpool have identified Shakhtar Donetsk’s Henrikh Mkhitaryan as a leading transfer target for the summer and are not deterred by the £22m price tag on one of the most coveted players in European football.

The Anfield club have registered their interest in the Armenia international, who scored a record 25 goals in the Ukrainian Premier League last season despite operating as an attacking midfielder. Mkhitaryan put Europe’s leading clubs on alert following Shakhtar’s elimination from the Champions League by admitting he wanted to play for “one of the strongest clubs in the world”, and the 24-year-old was subsequently linked with Barcelona, Chelsea and Manchester City. 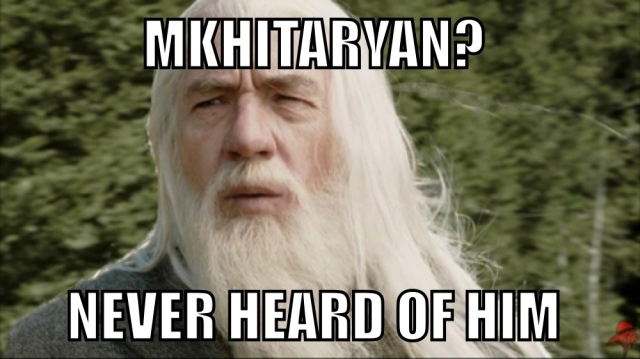 So this is the newest development over at Anfield and it’s creating quite the buzz. The club is set to sign Armenian attacking midfielder Henrikh Mkhitaryan (say that 5 times fast, good luck Gus Johnson) in the coming days. I have to admit, I had no idea who this person was up to 45 minutes ago, but after doing some trolling on the internets, I have to say that I’d be pretty damn pleased if this deal goes through.

The club is saying that regardless of whether Suarez is staying or going; Mkhitaryan will be their signing target and I’m all for it. The guy scored 25 goals last season in 28 league appearances! That’s more goals than the entire LFC midfield striking force from last season combined. Granted he was playing at Shakhtar Donetsk and I’m pretty sure that they use tumbleweeds as defenders over in the Ukraine, but still, goals are goals! I’m hoping this move gets done quickly so FIFA 2014 can have an updated LFC midfield and leaving Stewart Downing off the starting 11. A midfield made up of Coutinho, Gerrard, Lucas, and the Armenian Devil can only mean one thing: top 4 finish.