Last night was the final of the Europa League championship which faced Chelsea against Portuguese side Benfica.  It was a decent matchup and sometimes the Europa League doesn’t get the credit it deserves; but then again when Chelsea is winning it, it shouldn’t get any credit.  Both clubs qualified for the Europa League after not making it past the Champions League knock-out stages.  I guess that’s fitting: Can’t cut it with the big dogs, slay the competition of the little guys.

And in all fairness it was actually a pretty good game, evenly matched and went down to the final minutes of regulation.  Chelsea continued their fine European form and entered their second straight European competition final without key players Eden Hazard and Jon Terry (noted twat).  Fernando Torres also continued his hot European form and opened up the scoring with a Cheeks of the Week classic cheeky finish.  1-0 Chelsea.

Oscar Cordoza leveled for the Portuguese on a penalty after a hand ball in the box from Azpilicueta (that’s fun to say).

And then Branislav Ivanovic, who luckily has not turned into a zombie, scored a 93rd minute winner with this header.

As noted earlier, Jon Terry was not in the lineup for the final due to an injury sustained over the weekend.  However, he felt it was his right to celebrate with the team….. with his full kit on.  After Ivanovic scored his winner he sprinted (on his injured ankle?) down to the changing room, stripped out of his suit and into his kit to get on the field to celebrate with his teammates as if he was on the pitch the whole time.  He did the same thing last year when they won the Champions League, a game in which he was suspended.  Full gear, socks, cleats, everything.  Twat. 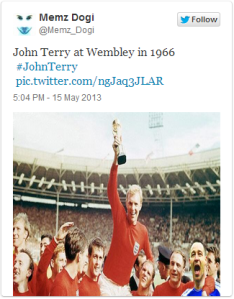 Yes, I'm a Man United fan and no, I didn't jump on the bandwagon 4 years ago. I've been a lifelong fan, born in the Manchester area and moved to the US as a young boy. Currently living in Boston, MA.
View all posts by ajbg →
This entry was posted in Europa League and tagged Benfica, Branislav Ivanovic, chelsea fc, Eden Hazard, Europa League Final, European Champions, European Goals, Fernando Torres, Jon Terry, Oscar Cordoza, Portuguese, Zombie Bite. Bookmark the permalink.