Galatasaray Fans Care Not For Tickets 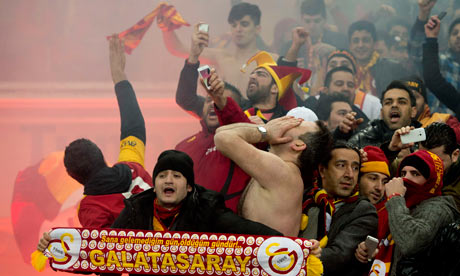 The Guardian: Schalke’s sporting director Horst Heldt has confirmed that a group of ticketless Galatasaray fans were caught trying to burrow into their stadium using their bare hands ahead of Tuesday’s Champions League match. With the away section heavily oversubscribed and tickets trading hands at prices of up to €1,000 before kick-off, the group resorted to desperate measures, trying to dig through frozen ground under a perimeter fence.

I respect the shit out of this move. Fan’s traveling to Gelsenkirchen Germany and denied entry at the door? No big deal for a mob of insane Turkish fans, we’ll just dig out way in. You really don’t see this kind of fan commitment in any other sport, more specifically, region, in the world. Using their bare hands to dig through ice and mud to try and slip under a fence. Props Galatasaray, props. This team is kind of growing on me, it’s like a retirement community for players who feel like they aren’t desperate enough yet to sign an MLS contract. This squad in FIFA 2006 would be an overall 96. Pumped to see them move on the the round of 8 in the Champs League.

These fans are giving the Lech Poznan Ultra’s a run for their money.

1 Response to Galatasaray Fans Care Not For Tickets