Today  Roy Hodgson has announced his latest squad for the next World Cup qualification game against San Marino on the 22nd of this month.  The biggest surprise this time around is the inclusion of Rio Ferdinand.  Rio hasn’t played for country in almost 2 years, which some might say has a lot to do with that piece of shit John “slip and fall” Terry, but that’s a whole ‘nother story.  (Racism, that’s the other story.)  Anyway, Terry has since retired from International football so it’s great to see Rio back in the squad after an impressive season at the club level.

Another key inclusion is Michael Dawson, who is seeing his first playing time for England since March 2011.  A big part of that is the injury to Phil Jagielka and lack of playing time from Man City’s Joleon Lescott.  Which segways nicely into my next point…

Manchester City is shit.  Let’s breakdown the top Premier League clubs and their representation in the last England squad.

Hell, even Everton was able to provide 2 players.  Roy Hodgson is clearly upset that he won’t be able to include Jack Wilshere in his squad due to injury, so had he been included Man City would have the lowest representation from top PL clubs.  Last year’s ENGLISH Premier League champions can’t even contribute 1/10th to their domestic National team.  Disgrace. 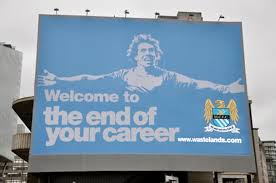 Yes, I'm a Man United fan and no, I didn't jump on the bandwagon 4 years ago. I've been a lifelong fan, born in the Manchester area and moved to the US as a young boy. Currently living in Boston, MA.
View all posts by ajbg →
This entry was posted in International Fixtures, Troll Corner and tagged England National Team, Manchester City, Premier League, Rio Ferdinand, Roy Hodgson, World Cup, World Cup 2014, World Cup Qualifiers. Bookmark the permalink.