Seriously, what is the price on that ref’s head right now?

I’m trying to look at this from a neutral point of view.  From a neutral point of view, you can’t argue that that red card didn’t completely ruin a wonderful game.  United snatch a somewhat lucky own goal and have relatively smooth sailing to the end of the match.  All they need to do is stick to their tactics.  That goal didn’t change the tactics on either side.  Real still needed a goal, all that changed is that if Madrid did only score one goal the game would go to extra time so United had bought a little bit of safety.  Madrid always looked up to the task of netting one so it was going to be an epic finish.

Until this dick intervened. 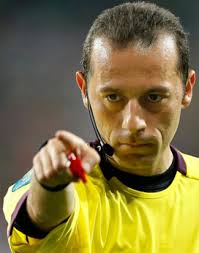 Really.  What is that call.  It’s a yellow at the very worst.  Nani with his head over his shoulder, clearly looking at the ball the whole time with his intent to settle it down in the air.  On comes Arbeloa, with every right to battle for the ball and catches a boot in the arm/ribs and goes to ground.  Fine.  It looked like it could’ve hurt both players equally as it was a 50/50 ball they both had every right for.  I’ll agree the foul was on Nani, and if he gets a yellow then I’ll understand.  Move on.  Game on.

Then this little Turkish piece of shit pulls out a RED???  I was in shock.  Not even mad, not sad, not disappointed, just shocked and surprised.  I couldn’t believe it.  I’ve never seen anything like that!  Never thought it would’ve been a red.  If you’ve been living under a rock, here’s the foul in GIF.

The red card completely changed the game, and ruined it as spectacle for all neutral fans (and honestly, I would think many Madrid fans as well).  Mourinho has said the better team did not win.  Pundits everywhere have said that no way this is a red card.  (Fuck you Roy Keane, just because you have a vendetta against Fergie.  Grow up.)

What can you do?  I could sit here and rant all day.  All bullshit aside, Real scored fantastic goals I can’t take away from their performance.  A screamer from Luka Modric and a class performance from Ronaldo.