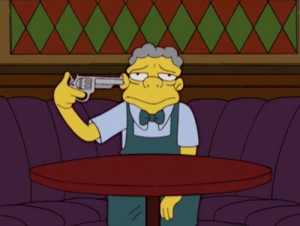 This is easily the most pathetic moment in the Liverpool 2012/2013 campaign, which has been chop-full of them. Giving 2 games away to Manchester City late? No. Getting Diddled by Stoke? Nope. Losing to Aston Villa at home? Not even fucking close.  This game was straight up pathetic. Every single second when it looked like Liverpool had something going, someone would rifle the ball over the net, get stonewalled when they entered the box, or Jose Enrique would pass it to someone in the 4th row at Anfield. Completely blew it. Luis Suarez deserves an Oscar for his acting that lead to that penalty kick; and I will never say anything bad about Steven Gerrard, so that save was an act of God. I’m chalking this whole thing up to an act of God actually. It’s the only way I can make any sense of it all. Game was rigged from the kickoff.